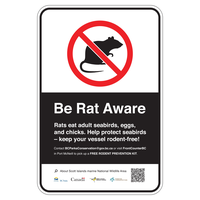 Boating in British Columbia can be an exhilarating experience. The abundance of sea life, rugged and rocky coastlines, and soaring mountain backdrops set the stage for memories that last a lifetime.

Many of our islands are recognized globally as important seabird breeding habitat. The Scott Islands are an example, which hosts 90% of Canada’s Tufted Puffins and 74% of Canada’s Cassin’s Auklets, which equates to 55% of the global population of this bird species.

Yet despite the seemingly endless numbers of marine birds on our coast, these numbers are not infinite. There is a pressing need to protect some of the largest breeding colonies from the greatest threat to their persistence – that of invasive, non-native rodents such as rats.

When rats are accidentally introduced to islands, they feed on the eggs and chicks of seabirds, and have been found to eat adult birds as well. The result of these rodent introductions is often the catastrophic loss of seabirds, and potentially complete bird extinctions as has been found in New Zealand and other oceanic islands.

Offshore islands contain a large amount of the world’s biodiversity. Sadly, most bird extinctions worldwide have occurred on such islands. Seabirds habitually concentrate in large numbers to breed on certain islands and so the effect of rodent introductions can be devastating to the species overall.

However, there is hope! We can all do our part to protect seabirds in BC from the accidental introduction of invasive rodents – by practicing sound biosecurity on your boat.

Fortunately, biosecurity methods are simple and reliable, if they are followed consistently:

You can collect FREE biosecurity rodent prevention kits at the FrontCounter BC office in Port McNeill, or contact BC Parks (BCParksConservation@gov.bc.ca) or Environment and Climate Change Canada (ec.rnfis-sinwa.ec@canada.ca) for more information about this important biosecurity project.